The common base amplifier is probably the most confusing and difficult of the three classical configurations to understand, especially for beginners.  But with proper analysis techniques, it can be tamed. 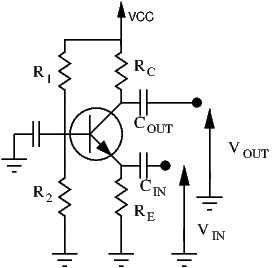 When first introduced to BJTs, we are taught “if you put more current in the base, much more current will flow through the transistor”.  So it’s very confusing for beginners when they see an amplifier where the input isn’t applied to the base.  Indeed, in a common base amplifier, the input is actually applied at the emitter, will the output is sampled at the collector.  Let’s see exactly how this circuit works.

First, we need to draw out the small signal equivalent circuit: 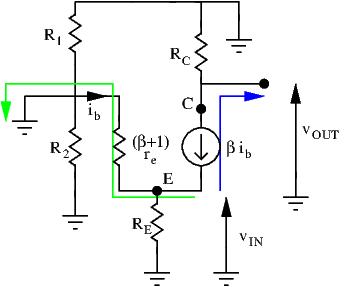 A KVL loop from ground to ground gives us:

being the voltage of the current source.  Rearranging terms and replacing

Our goal is to express

as a function of

.  Lets see what we can do.  Following the blue line:

Substituting v_{CE} with the expression found above, we obtain:

A second KVL loop (green line) gives us the following:

Isolating i_b we get:

Substituting i_b in equation (1) gives us:

, we can safely make the approximation that

, and we obtain the following equation:

, the CB amplifier has a high voltage gain. 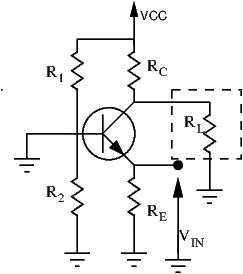 forces a current into

.  This same current is found coursing through the transistor (

).  Academically, to find the current gain of a circuit, we short out the load and calculate the short circuit current, as shown on the above diagram.  Shorting the load makes the AC signal ignore

.  All the current flows through the short.  Thus, output current is the same is input current.  Current gain is unity, or no current gain.

We find the input resistance the usual way: by applying a test signal at the input and determining the test current. 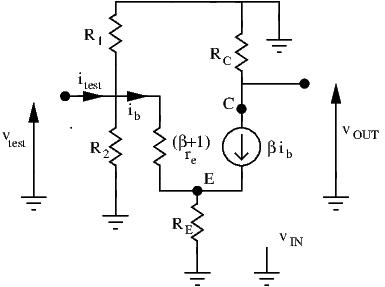 At the emitter node, test current flow to three branches: from the current source, to

and to base.  Thus, we have

is easy to find:

in i_{TEST}, and applying Ohm’s law for

We recognize a parallel resistance

The input resistance is thus

(tens of ohms generally).  An equivalent parallel resistance has a lower value than any of its contributing resistors, so

To simplify the process of determining the output resistance, let’s find the equivalent Thevenin circuit of our amplifier. 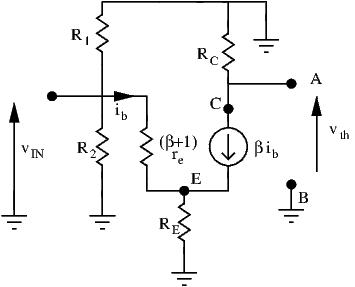 Quite trivially, we can now see that the output resistance

of the amplifier is simply

.  This value can be moderately high.

Why would we want to use the CB amplifier?  Its low input resistance comes in handy if we need to amplify signals that come from low resistance sources.  It’s especially useful in audio circuits.

It also has its use in RF circuits.  To understand why we’ll need a little more theory under our belt.  We’ll explain why its so useful in the next chapter on the Miller effet.

Many people forget that in a CB configuration, the base must still be biased.  Indeed, a stable voltage reference at the base must be applied, commonly through a voltage divider circuit.

Even more people are confused as to how this circuit even works, even after working through the equations.  This circuit seems like it goes against the common logic of BJT: where input current at the base is amplified through C-E junction.  But here, the base is “common” and no input signal is fed through it.  So how can this amplifier work?

Well, with the voltage divider circuit,

changes with the input signal

is changing.  There is a formula linking

This equation demonstrates the physics behind the transistor’s operation, but is seldom used for circuit design.  Just know that chaning

to change with it.  This is how the CB amplifier works.  As

increases and more current is sunk through the BE junction, lowering

Let’s recap the fundamental characteristics of the Common Base amplifier: