When studying amplifiers it’s impossible to leave out the differential amplifier.  It is a very common and well known building block in electronics, and is also the basis for one of the most popular RF mixers: the Gilbert Cell mixers.  Learning about the differential amplifier won’t just give you a useful tool in your electronic repertoire, but it also gives us a good excuse to introduce what CMRR – Common Mode Rejection Ratio- is.

Differential amplifiers can be easily made with a single op-amp.  Some op-amps are even specifically designed to be used as such and don’t require external circuitry.  In this article however, we’re going to focus on the transistor differential amplifier. 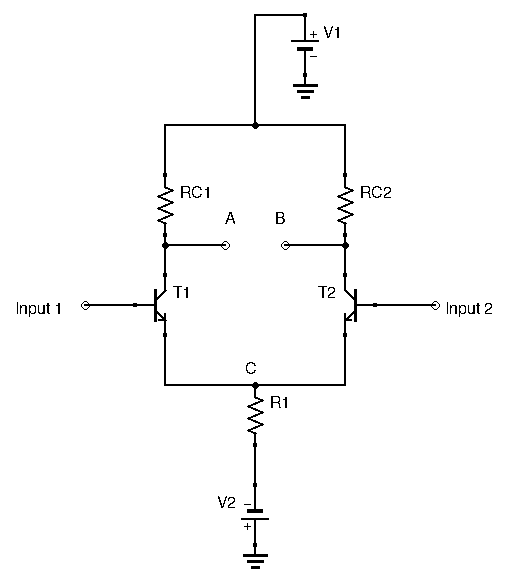 When using differential amplifiers, two different gains can be calculated: the differential gain, and the common-mode gain.

Let’s start with the common-mode gain. 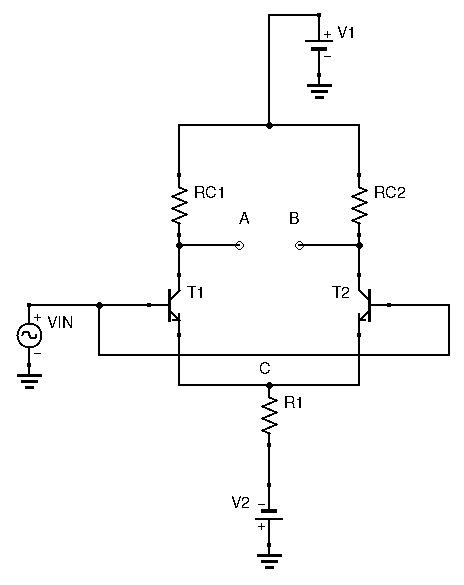 .  A common mistake would be to assume that the gain of this circuit is simply

.  The reason this is not correct is because the common emitter resistor

sees twice the current that either transistor handles.  So how do we find the true gain of this circuit?  A neat little trick outlined in The Art of Electronics simplifies this process nicely.  First, replace

by an equivalent resistor network consisting of two 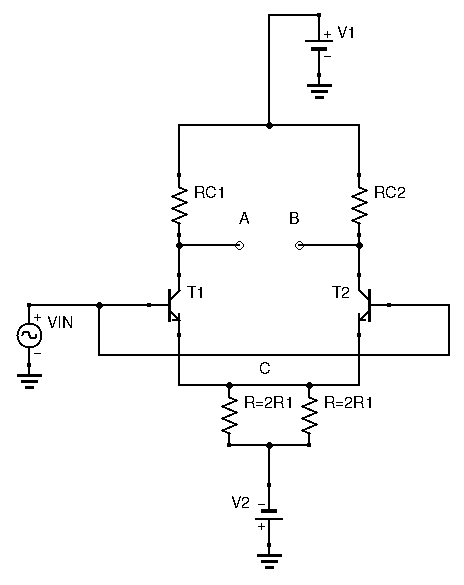 Now, we know that the transistor currents don’t flow from one transistor to the other, but instead go through the common emitter resistor(s).  Therefore, opening the circuit at point C is of no consequence.  Indeed, both legs of the differential amplifier handle the same current, and the same current will flow through each 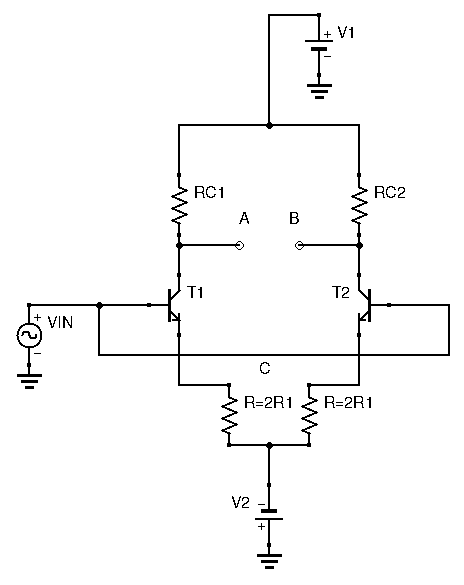 We can now easily find the gain.  Each transistor is in a classic common emitter configuration, so gain is

.  Our common-mode gain is thus:

The output is identical regardless of which output point A or B is used.  Taking the differential output (

) will yield zero.  In practical circuits the differential output will always show some minute voltages due the transistors not being perfectly matched, and due to the resistors’ tolerances.

To find the differential gain, instead of applying the same signal to both inputs, we apply a differential input, as follows: 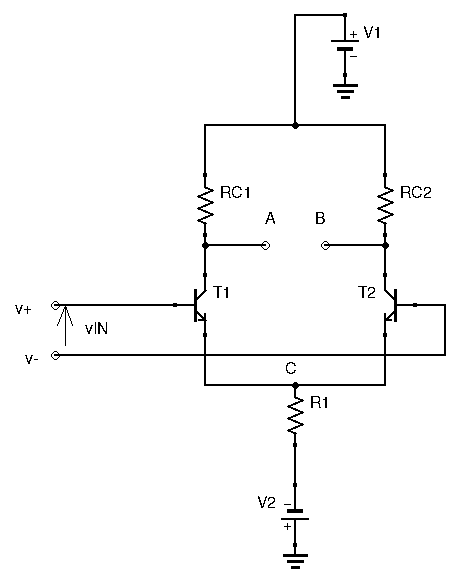 A little math is required to find this circuit’s gain.  Using the transistor’s equivalent circuit (see here for more details), we know that each collector’s current is:

Our output voltage is thus:

in mA.  Now we need to express v_{BE} as a function of our input signal

For each transistor however,

To find the gain here, we need to realize one important characteristic of this circuit.  The input is differential.  That means that for every 1mV of signal increase at transistor

‘s base, there is an equal and opposite 1mV of signal decrease at transistor

‘s base.  Since the transistors and collector resistors are identical, this means that when collector voltage drops by a certain amount at

, then the collector voltage at

increases by the same amount.  The same can be said for their emitter voltage.  Since both emitters are connected at point A, point A is a fixed voltage that doesn’t change with the input signal.

The last thing we need to understand is the relationship between

.  For every mV of increase in

decreases by the same amount.  This causes

to change by twice that amount.  Another way to see it is that for every increase in 1mV of

increases by 0.5mV and

depending on which transistor we choose:

With the reasoning of the previous paragraph we can now link

And thus, we have:

If used as a single-ended output amplifier, this configuration, depending on which collector we sample our output voltage, will either have positive or negative gain.

However, if used as a double-ended output amplifier, as shown below, the gain changes.

Which is twice the gain of the single-ended output configuration.

To increase thermal stability and stabilize gain, identical emitter resistors can be used before point A.

An amplifier’s capability of eliminating common mode signals is measured by its CMRR: its common mode rejection ratio.  Mathematically speaking, CMRR is equal to the ratio of differential gain over common mode gain, often expressed in dB