Our next classic configuration is the Common Collector, or CC amplifier.  We’ve already covered AC-coupling and biasing in the previous chapter on the CE amplifier.  The concept is the same here and won’t be detailed.  For the CC amplifier, we’ll learn how to 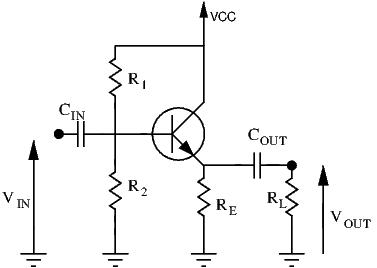 In this configuration, input is still applied at the base, while the output is sampled at the emitter.  To analyse this circuit, let’s draw the small signal equivalent circuit: 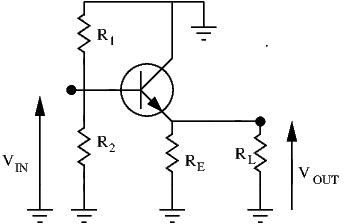 Find the load lines is essential for determining whether or not our Q-point, and thus our biasing, is adequate or not.  The DC load line can be found using the original circuit and using KVL on the loop going from

to ground.  This gives us the following equation:

We can safely say that

.  By substituting in the above equation, we have the obtain the following:

Using the DC load line, we can plot our Q-point on the characteristic curves of the transistor.

By adding the load and using the small signal equivalent circuit, we can apply KVL on the loop going from ground to ground, giving us the following equation:

We can now plot our DC and AC load lines on our characteristic curves: 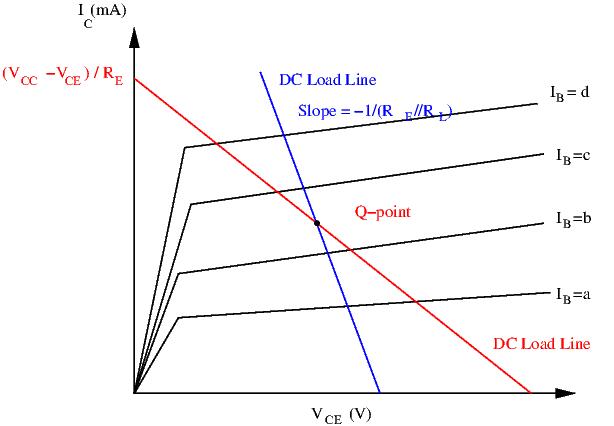 Voltage gain for the CC amplifier is quite straightforward.  For an NPN transistor, recall that

.  The input signal is applied at the base, so

.  The output is sampled at the collector, so the output voltage is

As we can see, the output voltage is only a diode voltage drop away from the input voltage: they are nearly equal:

.  This gives a voltage gain

a little less than unity:

.  By this point, some of you may be wondering why we would bother with this configuration if we want to make an amplifier.  So far, the only thing the CC amplifier does is replicate the input signal (with a small voltage drop).  Now, while it’s true that this amplifier has no voltage gain, it does have a current gain of

!  As RF enthusiasts, what interests us the most is not voltage or current gain, but power gain.  And with a high current gain of

(around 100-300), our CC amplifier definitely has power gain, even without any voltage gain.

By looking at the input and output resistances, we’ll find out why this amplifier configuration has a very useful characteristic and is a building block in many radio and audio circuits. 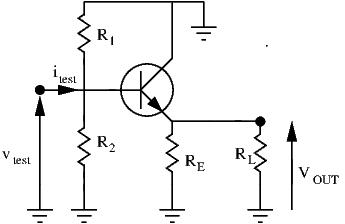 As usual, we calculate the input resistance by applying a test voltage at the input and determining the test current delivered into the circuit.  By following the red line, we have

.  A the emitter node E, two currents merge to flow into

: the one given by the input signal

, and the one given by the dependent source

as a function of

, we now just need to know

with the help of equation (1), we obtain:

This looks like a pretty complex equation, but there is a viable approximation we can make that can largely simplify it.

are our biasing resistors and are generally quite large (thousands or tens of thousands of ohms) to avoid draining too much current.  These two resistor values are (generally) much higher than any other resistances in the amplifier.  Thus we can safely say that

.  Equation (3) is greatly simplified by using this approximation:

Our input resistance is thus

.  This value is relatively high (notice the

means this circuit draws very little current from its previous stage, thus not loading it too much. 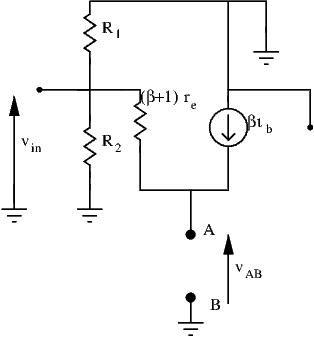 We can now greatly simplify our CC small signal model by the following:

SInce r_e is very small (tens of ohms) compared to R_E, we can simplify the equation:

Let’s recap what we found out so far: