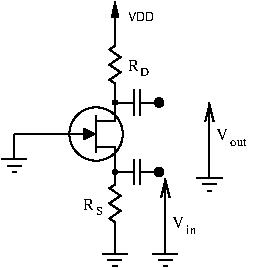 For the common gate amplifier, the input signal is applied at the source, while the output signal is sampled at the drain.  As you can see, the gate itself is grounded: the gate is “common”. 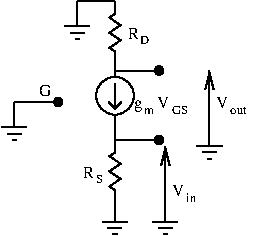 to find the voltage gain

in the first equation gives:

We can now calculate our voltage gain:

If we add a load, this gain becomes

To find the current gain, we need to add a load, and determine the input and output current. 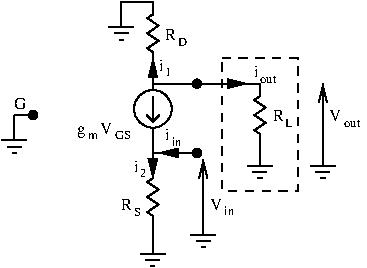 .  A node equation at the source terminal gives us:

(gate is grounded), we have:

next, using ohm’s law.  We already know the output voltage

since it was calculated in the previous section.

We can now derive the current gain

As we can see,

.  Our current gain is less than unity.  For

.  This is why you will often see people say the common gate amplifier has unity current gain. 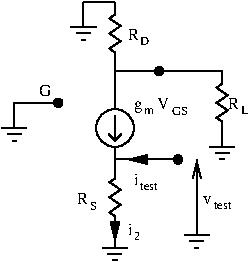 To find the input resistance, we apply a test signal at the input and calculate

The input resistance of the common gate amplifier is low. 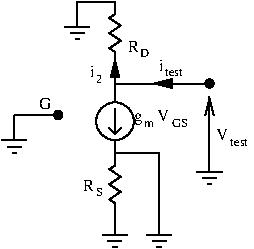 To find our output resistance, we remove the load and ground the input.  Then, we apply a test signal at the output and calculate

Using a node current equation at the drain terminal, we have:

However, since the gate and source are grounded (source is grounded because we grounded the input), we have

And thus, our output resistance is

.  This is considered high.

To recap, the common gate amplifier has: