We’ve learned about the basics of feedback circuits in the previous chapter.  Now is the time to actually see how we can exploit feedback to our advantage.  In this chapter we’re going to go through the necessary steps to exploit negative feedback in a transistor amplifier circuit.  To make things more interesting and more useful, circuit simulation using QUCS (Quite Universal Circuit Simulator), an open-source circuit simulator with an easy to use GUI interface, will be used to verify our claims.

Circuit simulation is a blessing for circuit designers, if used properly.  Basic electronic theory and rules of thumb are still necessary to rough out your design.  Using simulation you can quickly test your theoretical circuit and see which values need tweaking.  We’ll delve deeper into circuit simulation in future posts.

How we Exploit Negative Feedback

In the previous chapter, we learned that an amplifier with negative feedback had a gain of

being the open loop gain (the gain the circuit would have without negative feedback).  Using negative feedback, we can drastically reduce the effect of variability in gain of active devices, and thus more accurately control the gain, since with a high enough

, the gain will depend mostly on the feedback network

All feedback amplifiers work on the same principle: make a circuit with huge, poorly controlled gain, and then use a feedback circuit to greatly reduce the gain, but at same time make it much more stable. 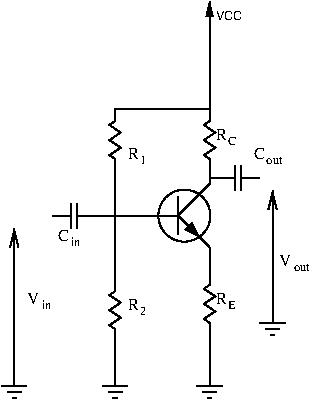 We will use the very common general purpose 2N3904 NPN transistor.  Let’s fix our design constraints:

We need two equations to determine

to ground gives us:

gives us our second equation, and this we find:

To find the biasing resistors

We find the base voltage

We can now find

to get the proper bias current:

, which is easily found with Ohm’s Law.  The voltage drop across

We have our final circuit, here drawn in QUCS: 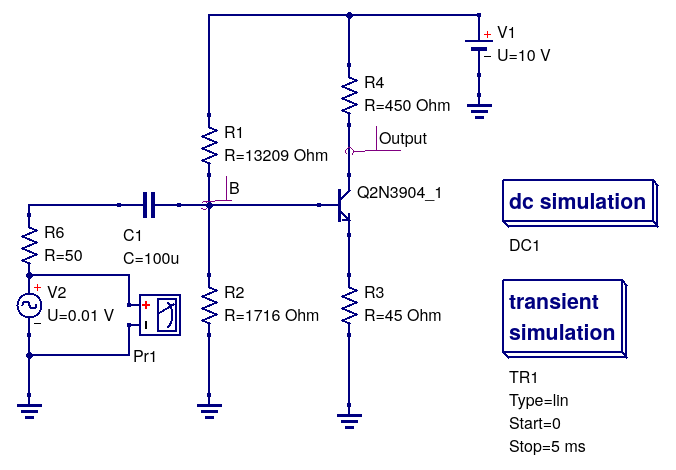 Don’t mind the impossible resistor values here, this example is not meant to be reproduced in real life, and serves just as a teaching example.  Notice here that we’ve added a source resistance after our AC input voltage source, equal to

.  The signal coming from our input follows a certain resistance.  In RF design, very often our signal will come from a 50 Ohm transmission line, hence the 50 Ohm resistance.  If the signal comes from a laboratory signal generator, very often it will have a 50 Ohm source resistance as well.  This value can usually be found in the datasheet.

Notice also the AC-coupling capacitor value.  It is huge, at

.  The reason for this is the frequency I’ve chosen for the input signal: only 1 kHz.  The lower the frequency, the higher the coupling capacitor value will have to be.  To come up with this value I simply toyed around with a several values in the simulator and chose one that gave acceptable results (aka having the full swing of the input signal translated at the transistor base).

Don’t fret if you don’t understand what is it I’m doing with the software.  I’ll have a small chapter dedicated to circuit simulation in the future.  After simulation, we have the following graphs

The gain is approximately 10, which is what we designed for.

A voltage gain of 10 isn’t a lot.  If we use feedback on this circuit, our gain will drop.  We don’t have much gain to begin with, so before playing around with feedback, we need to increase the gain.  We’ve already designed one Common Emitter amplifier.  All we need to do now is cascade a few of them together to multiply the gain.  Our goal is to use negative feedback, so we will use an odd number of stages.  This way the last stage’s output voltage will be 180 degrees out of phase with the input.  Feeding it back into the input will provide negative feedback.  Using an even number of stages, the voltages will add, creating positive feedback and driving our circuit into saturation.

That said, stacking 3 of these amplifiers should give us an open-loop gain of approximately 1000: 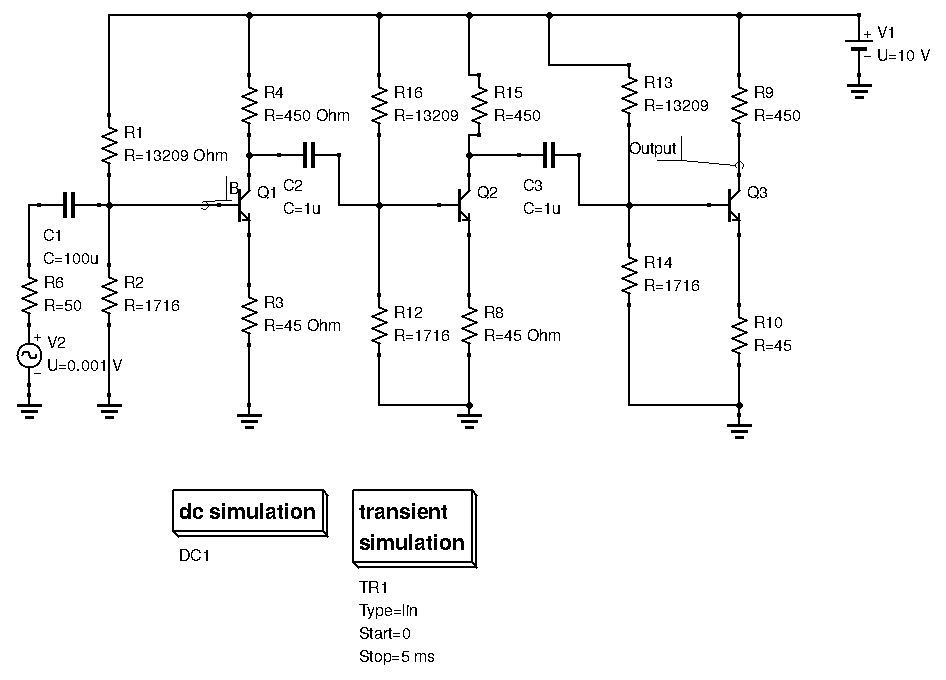 , while the input resistance is less than

, hence voltage divider effects are in action, reducing overall gain.  We’ll talk more about properly cascading amplifiers in later posts.  For now, a gain of 400 is good enough for our purposes. 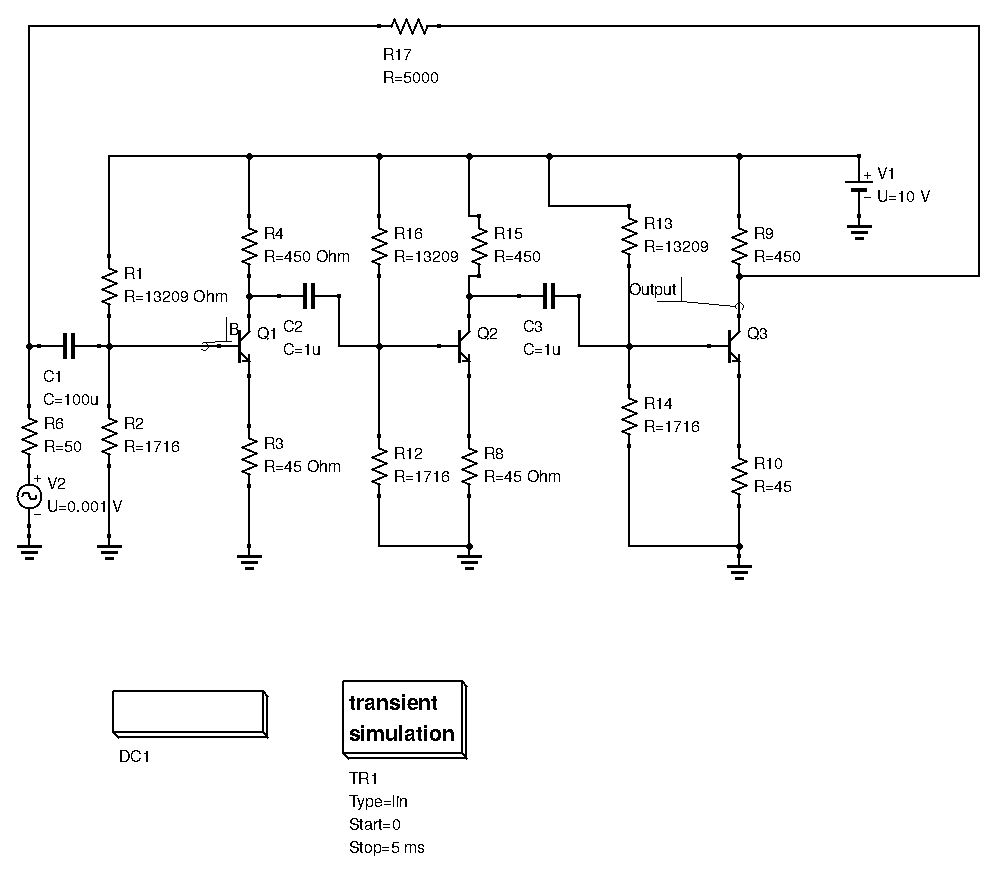 is our feedback resistance

is, the lower the amount of current that is fed back into the input.  Hence, a higher

means lower feedback, whilst a lower

means a high feedback.  This whole scheme is starting too look complicated, lets simplify the circuit: 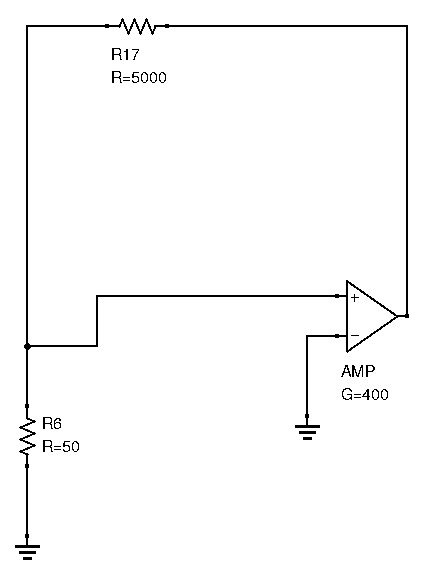 being so low compared to the other resistances, we can ignore all other input resistances.  The feedback network then is solely dependent on the voltage divider resistor network formed by

divides the output voltage by

(as an example, nothing more to it),

, and the loop gain

.  We can then calculate the closed loop gain

With feedback, our gain is reduced from 400 to 80.  Let’s see if the simulation confirms this: 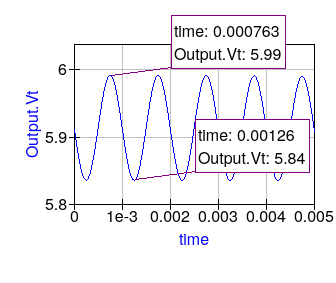 Now, the above feedback amplifier isn’t great.  The different stages aren’t properly cascaded, and the loop gain is very low.  To truly reap all the benefits of negative feedback, we ideally want a higher loop gain, at least 20.  This way, the open-loop gain of the circuit becomes irrelevant.

Also, be aware that the values for resistances we used here are definitely not standard values.  You can’t build this circuit! This was just to illustrate a concept.  Of course, if you were to reproduce this circuit with real components, you would constrain all resistor values to the nearest standard value.  The circuit’s behavior shouldn’t be grossly affected by the change.

In this example finding the feedback network

was relatively easy.  In fact, the block diagram we introduced in the previous post implies that the feedback network is easy to find and independent of any other circuitry.

Unfortunately this is not always the case.  Often times the feedback network is intertwined with biasing components and the active device itself, making identifying

nearly impossible.  In such cases, there is a universal method that allow us to determine the loop gain, without having to find

The universal method of determining loop gain in a negative feedback amplifier has 5 steps.  Once you’ve identified the feedback loop:

Lets use the previous 3 stage amplifier an example: 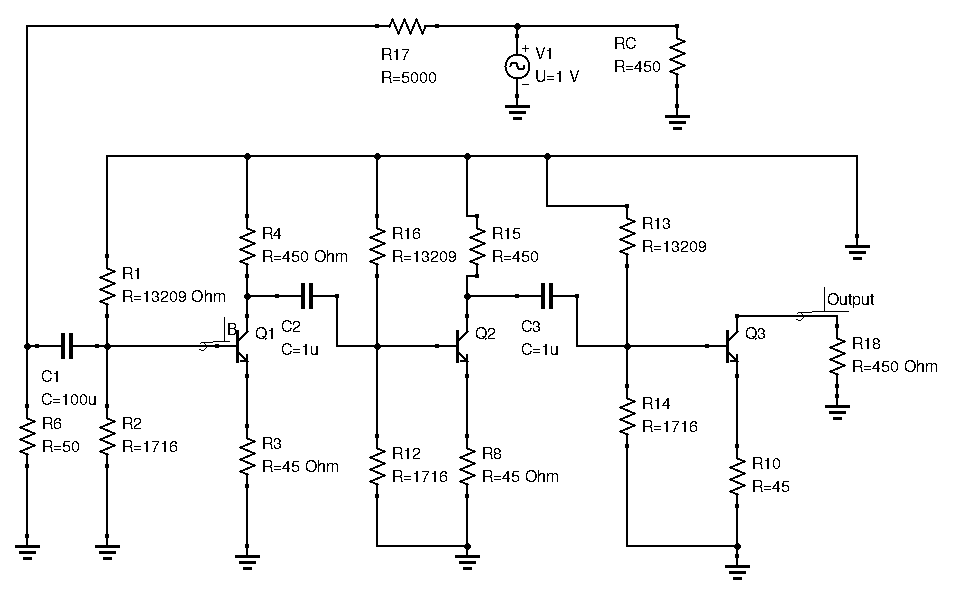 Feedback can be a difficult subject to wrap your head around.  Many people are able to easily exploit Op-Amp feedback circuits, but get stuck when studying even simple transistor circuits with feedback.  Just remember that to exploit negative feedback in any circuit, you need to: