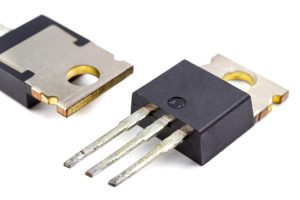 I’ve noticed that very often, the first active device that students see if they study any kind of electronics past high school is the Op Amp, and only later are they introduced to the humble transistor.  From a teaching point of view, I can understand this choice.  Op Amps can be treated as a very simple black box, and feedback is incredibly easy to exploit and get across.

From a ham’s perspective however, transistors will come up in our designs very often, and learning to analyze circuits that use them is a prerequisite.  Almost every ham circuit uses at least one of them.  So let’s get started with the BJT – the Bipolar Junction Transistor.

How they Are Made

There are the two kinds of BJTs, the NPN transistor, and the PNP transistor.  Here are their corresponding symbols:

N-type silicon possesses a lot of free electrons that, under the right circumstances, may move move to different atoms.  To achieve this particular property, N-type silicon is doped (enriched) with an element that is able to give away its electron, a donor element.  For those more chemically inclined, this doping element has 5 valence electrons, and is part of group 5A of the periodic table.  Commonly used elements for N-type doping are Phosphorus and Arsenic.

We’ve only scratched the surface of semiconductor manufacturing and properties.  If all this seems a bit overwhelming to you, don’t worry, this was just to give you a bit of technological background on the devices we will use throughout our ham career.  The main takeaway here is that semiconductors are made by sandwiching P-type and N-type silicon in different ways.  Next we’ll see how these semiconductors actually work.

Now we get to the interesting part!  How does sandwiching P-type and N-type silicon actually accomplish anything?  To explain this, let’s look at the NPN transistor in more detail.

BJTs have 3 ports: base, collector, and emitter.  Most circuits won’t have the ports labelled, so you’ll have to memorize the position of each port on the transistor.  The base is easy enough to recognize, but many beginners (and more experienced hams and engineers as well) have trouble identifying which port is the collector and which is the emitter.  If this is your case, just remember that the port which has the arrow will always be the emitter, whether it be an NPN or a PNP transistor.  If you have trouble remembering which symbol relates to the NPN transistor, and which relates to the PNP transistor, you can use a simple mnemonic trick to remind yourself of the correct answer.  NPN transistors have arrows that are ‘Not Pointing iN”.

To overcome this barrier, we can apply a positive voltage source to the base of the transistor. 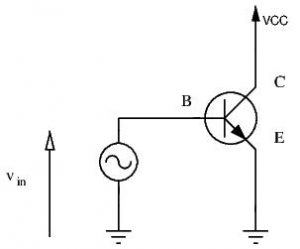 While the above paragraph isn’t technically correct, it is a good place to start to understand how a BJT works.  More detailed analysis of the inner workings of transistors are widely available on the web and in classic textbooks.  For our needs however, an intuitive feel of the physics behind semiconductors is enough to get us going.

We just saw that BJTs are composed of three layers of doped silicon.  Both NPN and PNP transistors then contain 2 PN junctions.  A PN junction is the area where the P-type silicon and N-type silicon meet.  As said in the previous section, it is easy for electrons to travel from the N-type region to the P-type region, but the reverse requires much more energy.  A PN junction is simply a diode, allowing current to flow in only one direction (from P to N).  A diode is also a semiconductor. 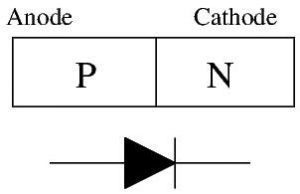 We know that when diodes conduct, there is a voltage drop across the diode equal to around 0.7V (or 0.2V for a germanium diode).  We then have our first transistor characteristic.  For an NPN transistor:

:  the base-emitter junction must always be forward biased (more positive at the base than at the emitter)

For a PNP transistor!

: the emitter-base junction must always be forward biased.

We still haven’t explained how transistors can amplify signals.  As said previously, a control signal flowing into the base can command a much greater flow of current to flow through the collector and emitter.  That flow is orders of magnitude higher than the control signal.  We have amplification.  A transistors current amplification ratio is written as 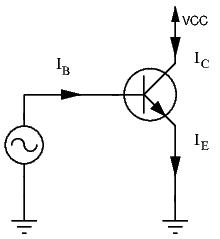 That amplification is not free of course, the transistor needs to be connected to a power supply to be able to deliver the wanted current (the collector is connected to

Often, it may be easier to work with input voltage instead of input current.

is a transistor’s current gain, connecting base current to collector current, and has no unit.  Another popular quantity that is important to understand is the relationship linking control voltage and output current.  We call this a device’s transconductance

It is difficult to analyse a circuit containing transistors outright.  To simplify the process, we need to use a representative model of our transistor so we can then apply our tried and true electronic circuit theory methods to solve it.

Depending on the frequencies our circuit will need to handle, we will choose different models.  To start our education in the realm of transistors, let’s take in the simplest of these models, valid for low frequency applications: 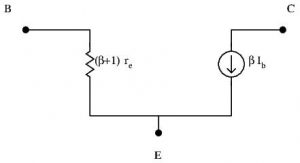 Between collector and emitter we have a dependent current source, giving a current of

.  Straightforward enough.  But what is

in the base to emitter resistance?  Is it linked to one of the characteristics we discussed earlier?

Let’s consider the emitter grounded.  We then have:

With these equations, we can find the relationship between beta and

is the inverse of our transistor’s transconductance (in Siemens)

is indeed a resistance, expressed in Ohms.

can be explained as being the resistance seen from the base to the emitter.  Think of it as an internal resistance the emitter has.  Its value changes based on the emitter current, and is equal to:

in mA. This value will prove to be quite useful to us for our calculations later on.

So far, we have covered how a transistor works, as well as 3 essential things to remember: